By starting the story in the teen years of Lady Diana de Vere, in 1684, readers are treated to the final scenes of the lives of King Charles II and his mistress, Nell Gwyn. They’re the parents of the illegitimate Charles Beauclerk, Duke of St. Albans, who later married Diana. The suspense started early for me, wondering if King Charles lusted after young Diana for himself, or if he simply admired her beauty and innocence. And Diana was beautiful, as you see from her portrait on the book cover.

The author takes us behind the scenes of the royal succession of King James II and his daughter Mary Stuart, who married Prince William of Orange. Most of the royal characters are cousins, but only the girls were legitimate heirs to the throne—and they weren’t exactly forthcoming with heirs, perhaps because of the many cousin marriages in European royal houses of the time.

As a lover of both history and historical fiction, I wasn’t sure what to expect when I began reading A Pledge of Better Times. The cover declares it’s a novel, and of course the narrative style means that scenes and conversations were invented by the author. But the wealth of detail, the large list of people who actually existed, the pull-quotes at the beginning of each chapter, the paintings discussed (which you can easily find in image searches), the architectural detail of the palaces—all point to the author’s deep research into and familiarity with the politics and events of the late 17th and early 18th centuries. The map, character list, and end notes were fascinating history. Having researched similar sources to Margaret Porter’s for my own books, I saw the genius in her method: taking an event and working backward, sometimes for a few years or even a generation, unraveling faded and tarnished embroidery to discover what motives, attitudes, and quirks-you-can’t-make-up must have happened to lead the characters to act as they did. Then she found new, colorful silks to embroider the facts lost over the centuries into a cohesive story.

I was often confused as to which character was which: I lost track of which names match which titles: Hon. Henry Sidney=Lord Romney (and was he the father of Diana’s sister, or was he Charles’ friend, or both?); Sarah Churchill=Countess Marlborough=Duchess of Marlborough; and other people with surnames and titles that were used interchangeably. Queen Anne calls her son “Gloucester” instead of his Christian name. Once Diana starts having babies, they’re called by their titles: Lord Burford, Lord this, Lord that, or their baptized names. Am I the only person who finds this confusing? This happens in many books about English aristocracy, so no demerits to the author. And she does give a character list at the front of the book.

The stories of Diana de Vere and Charles Beauclerk, Duke and Duchess of St. Albans, are carried from 1684 to the first third of the 18th century. I appreciated the ease with which the author described a complicated royal succession and how she ably depicted the social climbers and the kind and dignified people who inhabited the same space. I could feel the embarrassment and grief of Queen Anne, and how the queen was trapped by her own past.

A Pledge of Better Times is an outstanding pageant of passion and love, loyalty and betrayal, secrets and treason, service and sabotage, actual and imagined events, and is suitable reading for adults and older teens. There are discussion questions at the end to aid in book groups and classes.

I suggest that you read this book in hard copy rather than ebook, so you can easily navigate the notes at beginning and end, and study the cover art while you enjoy the story in between.

Disclosure: I received an advance uncorrected proof from the publisher in exchange for an honest review. 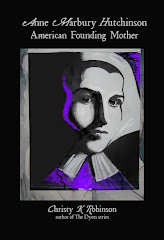 Christy's novels are hot off the press--and cool on Kindle!

My books available in paperback and Kindle

Christy K Robinson
Christy K Robinson is an author and editor whose biographical novels and nonfiction book on William and Mary Dyer were published in 2013 and 2014. Her hardcover book We Shall Be Changed is also available. In September 2015 she published Effigy Hunter, a nonfiction history and travel guide, and followed that with a contemporary biography on Anne Hutchinson.